International consensus holds that deep geological disposal is the right answer for higher activity radioactive waste such as spent nuclear fuel, vitrified high level waste and long-lived intermediate level waste. Other options such as indefinite storage have been discounted.

Moreover, the view is that deep geological disposal should be done without imposing undue burden on future generations; i.e. it should be implemented in a sustainable manner by the generation that produced the waste.

Deep geological disposal involves burying the waste several hundred metres underground to isolate it safely from the human environment for many tens of thousands of years. Disposal of lower activity waste is practiced in many countries through near-surface or shallow facilities, such as LLWR in the UK and El Cabril in Spain.

In effect there are two broad geological disposal concepts in play: disposal in a mined, deep geological repository several hundred metres down, and the vertical borehole concept which would extend to several kilometres deep. Both of these have been the subject of study in several countries for many years, with the former concept in the process of being implemented in several. The vertical borehole concept is yet to be adopted as the preferred solution in any country.

However, things might change for the borehole concept with the recent introduction of a horizontal borehole design by a US company which challenges some of the technical drawbacks of the vertical design, although not without introducing several of its own.

In this article we look at each of these methods and consider what the future may hold for the horizontal concept in particular.

There are several design variations for this concept depending on the rock type utilised and the wasteform disposed of. The three principle rock types are hard rock (such as granite), clay formations and evaporites (such as salt). The basic concept is that nuclear waste is carried down to underground vaults either through a vertical shaft or inclined roadway (see Figure 1). The layout of the vaults themselves varies depending on the type of waste involved and its heat generation, but it can cover many square kilometres.

There are three countries with the most advanced geological disposal programmes. Finland started construction of its 400-450m deep repository in hard rock for spent nuclear fuel in 2015 and disposal operations are planned to commence in the 2020s. Sweden has selected a hard rock site for its 500m deep repository and expects to start construction in the early 2020s. France is investigating deep geological disposal in an underground research laboratory in a clay formation. This is planned to be extended in 2022 to commence a “pilot industrial phase”, progressively leading to full operations. Several other countries are at various stages of facility site selection with the UK having recently embarked on a new siting process. 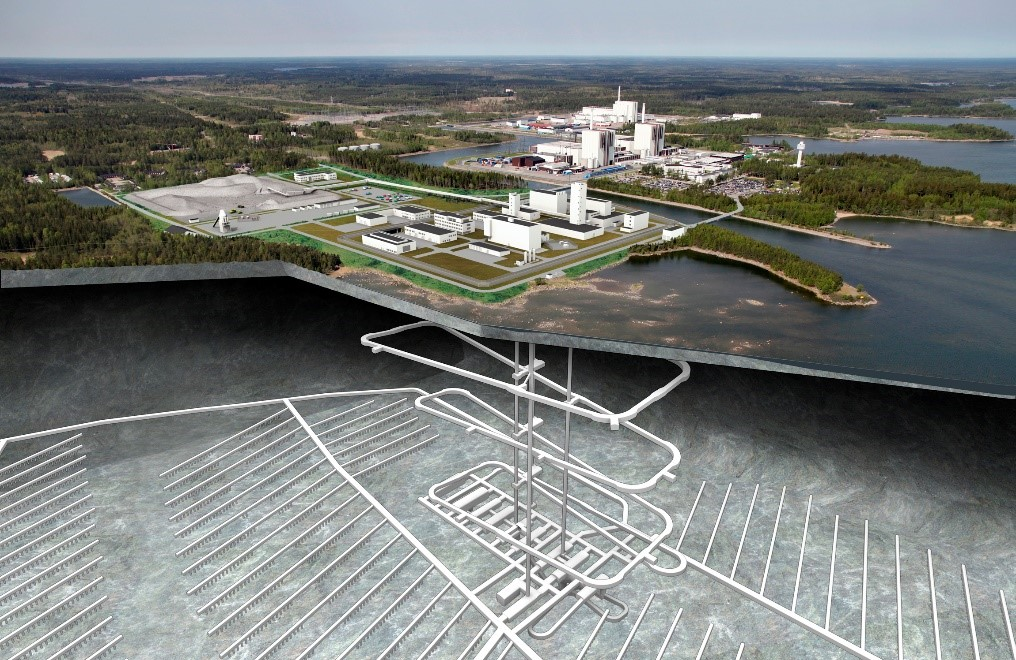 The concept for vertical boreholes is for the high-level waste to be sealed in cylindrical canisters which are lowered to the bottom of the hole with subsequent canisters stacked on top of each other (see Figure 2). The advantage of this over the more conventional mined designs is that they can be constructed more quickly and are potentially more cost effective. However, the disadvantage is the large number that would be required to take even a small nuclear power programme’s inventory.

Vertical boreholes of a relatively shallow depth of a few hundred metres have been proposed, for example by the IAEA, for the disposal of spent sealed radioactive sources that arise from industry and medicine. These are particularly applicable for countries with no nuclear energy programme and which would therefore have no other disposal facilities available, nor the demand for the higher volumes of disposal space that a nuclear energy programme would require.

A further disadvantage of vertical boreholes that is often cited is that they represent many possible routes for potentially contaminated groundwater to reach the surface if the boreholes are not adequately sealed – more so than for the mined design which could just have as few as three or so possible routes. Although the vertical borehole concept has not been adopted as the favoured method of geological disposal by any country, it is being studied for example by the Department of Energy in the US, and by the University of Sheffield in the UK.

A further variation of the borehole which has recently been put forward and has stimulated much discussion, particularly in the US, is the horizontal borehole. The novel variation lies in the hole turning through a large radius curve at the required depth to a slight upward incline (see Figure 3). The company that is proposing the idea (Deep Isolation) claims this uses conventional drilling technology utilised in the shale fracking industry, and point out that the length of the horizontal segment can be up to two miles. However, it does admit that these are usually only up to 200mm in diameter, whereas spent nuclear fuel canisters would be 450-500mm in diameter, and any borehole drilled would also need to be lined, implying a yet larger diameter. 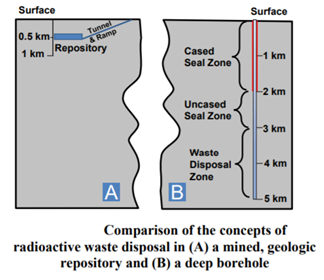 A report to the U.S. Congress and the Secretary Of Energy Technical Evaluation of the U.S. Department of Energy Deep Borehole Disposal Research and Development Program. January 2016

There are other issues for the moment with this concept which would need to be resolved before it could be put into practice. Safety cases would need to be made for the operational and post closure phases of any facility. One aspect that equally applies to a vertical borehole would be the lowering of a heavy, highly radioactive, spent fuel canister down several kilometres: jamming of the canister, breakage of the lowering cable and failure to release the cable would need to be considered. Assuming the canisters could be successfully emplaced in the horizontal tunnel, standard radiological safety cases would need to be performed, taking account of criticality and long-term radiological safety. The company admits these have yet to be undertaken.

Who could use such a design? Large nuclear programmes such as those in the UK and France would still need to develop the more conventional designed deep geological repositories as their inventories include waste packages much larger than the feasible borehole diameters of the horizontal borehole.

Potential users of the horizontal concept might therefore include those countries with only one or very few reactors.

Whilst it is still relatively early days and although the company has recently demonstrated the basic technology, it has yet to build a demonstration facility that could take spent-fuel sized canisters. As noted, it also has to develop its safety cases for the operational and post-closure phases.

As with the siting of any geological disposal facility, there will be the usual issues associated with transport, siting, retrievability of the waste, legislative and regulatory requirements, community engagement, licensing and so forth. There is much experience in all of these aspects from both within the US and around the world which Deep Isolation would be able to make use of. Before it gets into the addressing these, however, the main challenge for the company will be to convince a naturally sceptical radwaste community that it has a concept worthy of serious consideration. We will watch their progress with much interest. 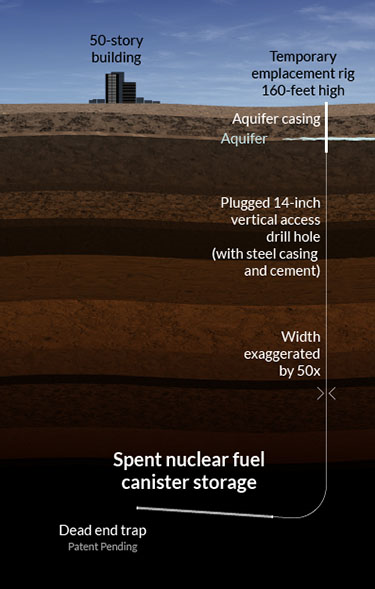 Prospect Law is a multi-disciplinary practice with specialist expertise in the energy and environmental sectors with particular experience in the low carbon energy sector. The firm is made up of lawyers, engineers, surveyors and finance experts.

For more information or assistance with a particular query, please in the first instance contact Adam Mikula on 020 7947 5354 or by email on [email protected].